Composite material is not a new material in mankind history, Fig. 1.1. Among the firstly
used composites were unburnt clay bricks consist of clay (matrix) and straw, reed or grass stalks
(oriented fibres). The ancient composites were generated without computational methods but based
on experiences and knowledge obtained during longer periods. 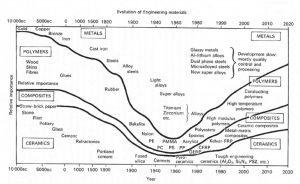 Fig. 1.1 Relative importance of the four classes of materials (ceramics, composites, polymers and metals) in mechanical

and civil engineering as a function of time [1]
Even, the names of individual historical periods are defined according to preferably used
material for tools or weapons – stone age, bronze age and iron age. One can see that in historical
periods the man is returning to already known things that serve as resource of knowledge. The man
makes some “re-discovering” but every time it creates also the new added value [2,3]. 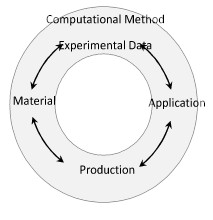 Presently, the professionals re-discover the composite materials and the added value is creation
of new and superior and more sophisticated materials, computational methods, production
technologies and applications (Fig. 1.2). The sophisticated and progressive materials are developed
thanks to new computational methods used in designing process of either material or composite
component and furthermore thanks to new production technologies of materials.
The four mentioned elements: material – computational (calculation) method – production
technology – application, create system that is schematically shown in the Fig. 1.2. The outcome of
interaction among the first three elements is the final application; it means the sophisticated product
based on composite material or composite structure or hybrid structure etc.

1.1. Analogy: Applications of steel and composite materials
The analogy can be made with steel (iron) that was not the completely new material in the
middle of 19th century. The steel became the re-discovered material regarding to new technologies
of steel production in 19th century that allowed the wide industry applications and also the low price
of steel. The possibility of usage the steel as engineering material the new production and calculation
methods had to be developed. Many scientists contributed to development of mechanics and its
calculation methods in 19th century such as L. Navier and his theory of beam bending and computing
of suspension bridges, G. Moseley and his first theory of steel bridges calculation, L.
Schwedler and his theory of space arched roofs, S. Poisson, B. Saint Venant, G. Lamè, B.
Clapeyron, D. Maxwell, L. Cremon, K. Coulman and others who concern to graphical and graphicanalytical
methods of structure estimation.

We can declare the influence of calculation method and new material to structure by bridges
built in New York between 19th and 20th centuries. The firstly built Brooklyn Bridge was the bridge
connecting the individual parts of New York. However, Brooklyn Bridge involved new material in
form of steel ropes (the first suspension bridge using the steel ropes), it has robust construction
(stone bridge towers), and it was being built for 13 years (finished in 1883). The new calculation
methods, e.g. Moisseiff’s deflection theory, were applied to new steel material and used for other
bridges in New York changed bridges to lighter-weight, all-steel and longer constructions that were
built in much shorter time.

Moisseiff’s deflection theory was used to design Manhattan Bridge with steel towers. L.
Moisseiff had become a leading suspension bridges engineer in USA in the 1920s and 1930s. He
made such saving modifications in construction of Tacoma Bridge (the third longest suspension
bridge span in the world in its period) based on his theory that resulting the collapse in four months.
The failure confirmed the limitation of his theory.
Naturally, the usage of steel definitely changed the arms and weapons of that time armies.
Since 1900, the all battle ships as the guns and cannons were made of steel. Many new weapons as
the machine guns, submarines and tanks (the first in 1915) could not be made of other material than
steel.

The similar situation in field of composites is in aircraft and military industry. It was the first
that starts to use composite materials and it still moves the usage possibilities of composites. Presently,
the composite materials are in use of all industries. However, this field can present the case of
engineering work failures. The well-known failure is, except the Tacoma Bridge collapse, the Challenger
Space Shuttle accident in 1986. The designers inclined in design of failed component to experimental
data without specific theory [4].
The mentioned two cases of engineering fail (Tacoma Bridge and Challenger accident) in
20th century serve as examples of two anti-poles: computational (calculation) method and experimental
data. It is needful to realize that there are two sides of the same coin.
While in 1970s the share of carbon fibre composites used in Airbus aircraft was only 5%, at
the beginning of 1990s it was 10% and at the beginning of 21st century 15%. The share was 22% in
Introduction

Nowadays, we can develop so called the design-material approach in designing process that
puts together the component designing and inner material structure that is not homogeneous but
anisotropic (orthotropic).
Designing of structures regarding composite material structure is connected with components
manufacturability. Finding the appropriate production technologies is the work for material
engineer technologists.
There are other tasks: what would be strength and stiffness of designed composite material
of component; what are the material properties of designed composite material; where is the dangerous
location of component etc.
Finding the answers is impossible without appropriate computational methods that are able
to reliably simulate the material structure including the reinforcement or provides some idealisation
– homogenisation. Furthermore, the experiments are necessary to do to verify the results of the
computational models.